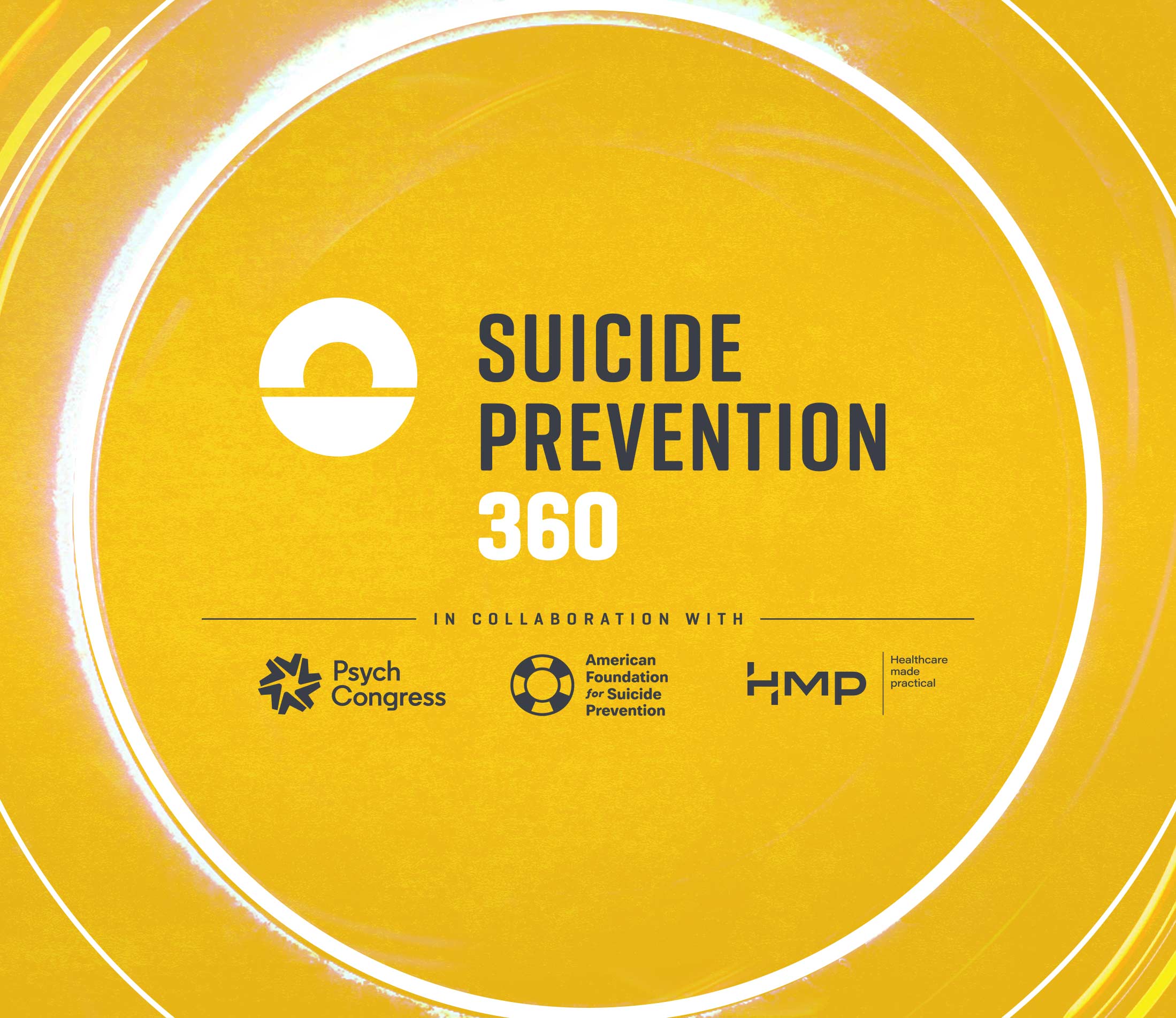 MALVERN, PA (September 18, 2019) — In concurrence with National Suicide Prevention Month, HMP, a leading healthcare education and events company, today announced the launch of the Suicide Prevention 360 initiative. This sweeping effort establishes a partnership between its Psych Congress education brand and the American Foundation for Suicide Prevention (AFSP), to develop and deliver critical educational resources for mental health clinicians and other medical professionals aimed at preventing suicides.

Suicide continues to be a major public health problem in the United States and around the world. It is the tenth leading cause of death in the U.S., where the rate is higher than at any point since World War II. On average, there are 129 suicides per day. In 2017, 47,173 Americans died by suicide, and there were an estimated 1,400,000 suicide attempts.

In collaboration with AFSP, the Suicide Prevention 360 initiative delivers practical tools, training, and other resources for professionals, both in person and online. An initial slate of education has already rolled out at several Psych Congress programs in 2019, including Elevate, a conference aimed at early career and forward-thinking health professionals, and Psych Congress Regionals, a series of one-day programs held throughout the U.S. AFSP experts Dr. Jill Harkavy-Friedman, Dr. Doreen Marshall, and Dr. Christine Moutier have been among the presenters of this critical content.

“The goal of the initiative is simple: to prevent suicides,” said Jeff Hennessy, chairman and CEO, HMP. “Too many lives have been lost. We want to set the stage for action that moves the needle on suicide prevention. As the leading provider of education for mental health providers, we knew it was time to do something when clinicians continued to indicate to us there were still large gaps in the kind of educational tools and clinical resources available to help them identify, treat, and manage patients who may express suicidal thoughts. The Suicide Prevention 360 initiative will close these gaps. We’re deeply committed to this long-term effort, and we expect to add more partners as we move forward. Our intent is to deliver education not just to our mental health audience, but also to other segments we serve across the global healthcare community, from EMS professionals to primary care practitioners. We can’t and we won’t stop until we see an end to the suicide epidemic.”

“This is an incredibly important initiative, and we could not be more pleased to be working with AFSP,” said Rakesh Jain, MD, MPH, Psych Congress co-chair. “Together, we want to educate clinicians and initiate action — helping clinicians be more competent and confident in assessing suicide risk, implementing safety plans, and counseling at-risk patients and their families. Working collaboratively, we can save lives and bring hope to those who have been affected by suicide.”

During the 32nd annual Psych Congress, taking place October 3-6, 2019, in San Diego, California, a special preconference dedicated to suicide prevention will be led by AFSP.

Psych Congress also has named AFSP its Charitable Partner for 2019. The designation includes a financial contribution to AFSP from Psych Congress. In addition, AFSP Vice President of Research, Dr. Harkavy-Friedman will address attendees during the Eric C. Arauz Memorial Keynote.

“We are energized to be engaging in this critical work with HMP and Psych Congress and honored to be selected the 2019 Psych Congress Charitable Partner,” said Dr. Harkavy-Friedman. “This is a critical audience, and we couldn’t possibly reach as many clinicians with these educational resources without working together. We must educate not only mental health professionals, but also professionals in many fields about the complexity of suicide and the warning signs, risk factors, and ways to intervene to prevent suicide. This new training will lead to a healthcare community that is even more knowledgeable about how to help those who might be experiencing suicidal ideation or a loss to suicide. There is much work to be done, but we look forward to the opportunities ahead and how this partnership will grow in the future."

To learn more about the initiative, visit SuicidePrevention360.com.

HMP is the force behind Healthcare Made Practical – and is a multichannel leader in health care events and education, with a mission to improve patient care. The company produces accredited medical education events and clinically relevant, evidence-based content for the global health care community across a range of therapeutic areas. Its brands include Consultant360, the year-round, award-winning platform relied upon by primary care providers and other specialists; Psych Congress, the largest independent mental health meeting in the U.S.; EMS World Expo, the largest EMS-dedicated event in the world; Rx Drug Abuse & Heroin Summit, the nation’s leading meeting focused on addressing the opioid abuse epidemic; and the Symposium on Advanced Wound Care (SAWC), the largest wound care meeting in the world. For more information, visit hmpglobal.com.

ABOUT THE AMERICAN FOUNDATION FOR SUICIDE PREVENTION (AFSP)

Established in 1987, The American Foundation for Suicide Prevention is dedicated to saving lives and bringing hope to those affected by suicide. AFSP creates a culture that’s smart about mental health through education and community programs, develops suicide prevention through research and advocacy, and provides support for those affected by suicide. Led by CEO Robert Gebbia and headquartered in New York, and with a public policy office in Washington, D.C., AFSP has local chapters in all 50 states with programs and events nationwide. Learn more about AFSP in its latest Annual Report, and join the conversation on suicide prevention by following AFSP on Facebook, Twitter, Instagram, and YouTube.