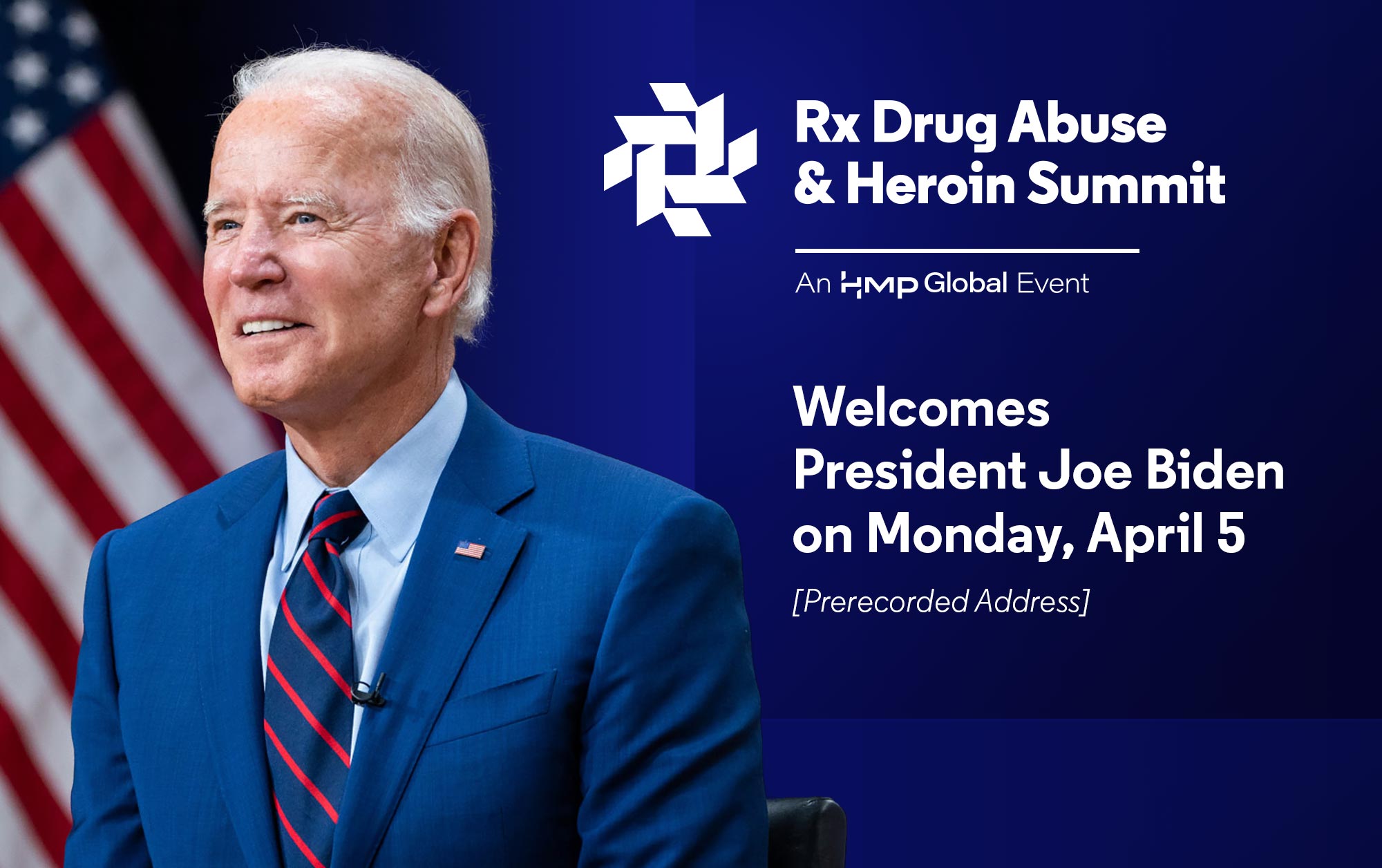 Prerecorded remarks will be delivered on Monday, April 5 to an online gathering of stakeholders from “federal to family” engaged in efforts to stem the accelerating substance misuse epidemic

MALVERN, PA, (April 1, 2021) – Amid alarming data from the Centers for Disease Control and Prevention (CDC) illustrating an acceleration of the substance misuse epidemic and drug overdose deaths as a result of the COVID-19 pandemic, HMP Global, the world’s largest healthcare event and education company, today announced that President Joe Biden will address participants of the 10th Annual Rx Drug Abuse & Heroin Summit on Monday, April 5, 2021, discussing his administration’s commitment to reduce overdose rates and save lives.

President Biden’s remarks will be delivered via taped video message during the opening plenary period beginning at 10:15 a.m. EDT and streamed through the company’s VRTX platform. This is the third time a sitting U.S. president will address the conference during their term. Former presidential speakers have included Donald J. Trump in 2019 and Barack Obama in 2016. Former President Bill Clinton addressed attendees in 2018.

“President Biden’s participation in the Summit signals that the addiction crisis is a top priority for the administration and underscores its gravity,” said Doug Edwards, vice president, HMP Global, who directs the company’s Psychiatry & Behavioral Health Learning Network. “Our country is facing many simultaneous crises and the COVID-19 pandemic has further exacerbated the addiction crisis. Treatment, rehabilitation, and public health programs across the country were disrupted by the pandemic, deepening the dangerous isolation faced by many Americans who suffer with substance use disorders. We are very grateful that the President will address the stakeholders working every day to find solutions that end this public health emergency.”

In addition to President Biden, the Summit’s presenter lineup features sixteen members of Congress, two governors, and other leading confirmed or acting agency officials, including:

The soaring death rate from drug overdoses hit a grim new record in 2020. The latest provisional data from the CDC show there were 88,000 opioid overdose deaths in the 12-month period ending in August 2020, a 26.8% increase, year-over-year, and the highest number ever recorded in a 12-month period. More than 220 Americans are dying every day from overdoses. In parts of the country in 2020, drug-related fatalities were on track to outpace deaths from COVID-19. Deaths involving fentanyl and other synthetic opioids have also surged and appear to be the primary driver of the death increases. In 2020, ten western states reported a more than 98 percent increase in synthetic opioid-involved deaths.

These deaths do not reflect the full public health impact of substance use disorders. Individuals who misuse drugs or alcohol are more likely to develop chronic health conditions, experience poorer health outcomes, and have contact with the criminal justice system. The costs are high: The National Institute on Drug Abuse estimates that substance use disorders account for more than $400 billion annually related to healthcare, lost work productivity, and crime. Effective care, including access to programs that provide medication-assisted treatment, remain a challenge for most to access, particularly when public health and healthcare programs that focused on addiction were forced to pivot to the COVID-19 response and could also face future budget cuts.

“Everyone and every community need to see this for what it is—not only a public health crisis, but a personal one. Those who are lost or who are suffering are our friends, family members, and neighbors—no one is immune to the effects of this horrific epidemic,” said Nancy Hale, President & CEO, Operation UNITE. “Our priority is to do everything we can to equip people to save lives in their communities. We are grateful to President Biden for his participation and his voice. Tackling this crisis will take time, action, innovative approaches, and everyone working together. Even with the significant challenges we face in this uphill battle, we must not lose sight of one thing – hope.”

HMP Global is the force behind Healthcare Made Practical—and is a multichannel leader in healthcare events and education, with a mission to improve patient care. The company produces accredited medical education events – in person and online via its VRTX virtual platform – and clinically relevant, evidence-based content for the global healthcare community across a range of therapeutic areas. Its brands include Consultant360, the year-round, award-winning platform relied upon by primary care providers and other specialists; Psych Congress, the largest independent mental health meeting in the U.S.; EMS World Expo, North America's largest EMT and paramedic event; and the Symposium on Advanced Wound Care (SAWC), the largest wound care meeting in the world. For more information, visit hmpglobal.com.